skip to main | skip to sidebar

Back again with another two hot records for you. The first one is 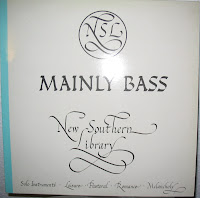 I'm not 100% sure if he is this Dave Richmond, but in the wikipedia entry they say he did session work, so I assume it could be him. Mainly Bass is very minimal record with mainly bass and drums. At least four tracks (summering menace,expansions, the prober, glissed again) could be from a new dusty fingers installment, the rest of the tracks are also very moody and soundtrack-like. 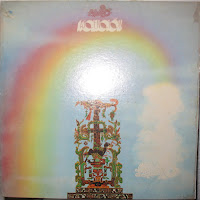 "When Latin funk and Latin rock had its brief moment in the sun during the '70s, a number of groups emerged. Most were imitation Santanas, but at least Malo could boast that it had a real Santana in the lineup. Carlos Santana's brother Jorge headed Malo, and he possessed a little of his brother's vocal sound. Unfortunately, he didn't have enough to keep Malo going more than a few years. Their debut LP for Warner Bros. reached number 14 on the pop charts, but it was all downhill from there." (allmusic.com)
The real killer track on this lp for me is "latin woman". While the other tracks have more of a latin/south american flavor, "latin woman" is a straight forward funk burner with a dope synth bass. Enjoy !
Posted by freakscomeoutatnight at 12:46 6 comments:

freaks come out at night

Wassup y'all? I've been reading mp3 blogs for almost two years now and got some incredible good music and information out of it. I think it's time to give something back.

Having an oldschool hiphop dj mentality, I'll play any type of music as long as it is funky and fresh. I'll try to bring you music from my collection that I think deserves more attention and promotion.
I'm doing this because I love music and believe that this a new and positive thing that helps the music and the artist in some way. If you are a copyright holder of music I post here and want the post deleted, contact me and I'll do it.

I'll try to make new post at least once a week, with cover pictures (I don't have a scanner) and selfmade rips of the highest possible quality.

Ok, let's get this party started. 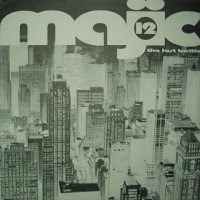 I coudn't find much information about the artist and the label, so if you have any additional infos, please contact me, because I'm very eager to learn more about this guy and the label.
"The Last Battle" is the fourth release on the Beau Monde label, produced by Scott Edward Hodgson aka Majic 12 who also released super dope funk and disco under the alias Uriel.
This is a funky electro jam with a new twist. You can definately hear the oldschool influence but he managed to give it a new direction, something, that in my opinion not many artists have succeeded in (in regard to an original oldschool 80s electro flavor).
There is no track on the b-side, only a cut in text: "THE LAST BATTLE: In a post-apocalyptic wasteland that once was the Earth twelve man stand poised to battle out the last dying seconds of a sick planet. The two surviving crews in their anti-radiation track suits face each other for the last ever burnoff. For twelve days and twelve nights they turn their tricks of precicion and provocation when without warning the desolate sky folds in on itself and they are erased for ever in a deafening silence. The twelve breakers of the last hour pass through to the other side of consciousness, to a life beyond life, an existence beyond existence where they battle for eternity on a lino so vast in every direction that it stretches the minds concept of distance, here they will stay crystallised for ever as immortals of a street paradise."
I LOVE THAT SHIT!!! 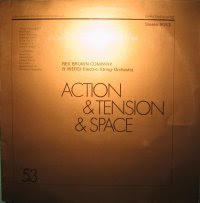 Library music, I love library music! There is so much funky music, yet unheard by most of human mankind, because this music got only released in low quantities and was specifically made for post production of radio and tv programs. The best thing about is, you could order these records for free!!! If you were a radio station or a tv station or studio, the library music companies would send you their whole catalogue. They got paid through royalties for the usage of their music. Many artists produced also under aliases (even more than one) for these library labels. The Rex Brown Company was Berry Lipman (born Friedel Berlipp), a german bandleader, composer, arranger and music producer, who became famous for making easy-listening versions of famous evergreens. His biggest hits were "The Girls from Paramaribo" and "La Parranda".
Action & Tension & Space is exactly what the title says, drama, elcetronics and funk deluxe! Some tracks from this release have been used on the soundtrack to the british-german sci-fi tv show Star Maidens. There are no weak tracks on this record, only killers, no fillers!

See you next week!
Posted by freakscomeoutatnight at 08:33 11 comments: